BEIJING, China – Wuhan champion Aryna Sabalenka is through China Open quarterfinals after battling through a gritty win against Caroline Garcia, the defending champion, in thee sets, 5-7, 7-6(3), 6-0.

Sabalenka came into the tournament seeking to become the second player ever to win Wuhan and Beijing back-to-back – a feat first accomplished last year by her opponent Garcia, who was now seeking to be the first woman to defend a China Open title.

Garcia made a strong start, staying solid and aggressive against Sabalenka’s ultra-fast pace – she was down a break twice at the start of the set, with Sabalenka breaking at 1-0 and again at 2-1, but the Frenchwoman never let her opponent run away with it.

Instead, she raised her level and started taking the ball early – and was rewarded with four games in a row to make it 5-2, and put herself in the position to serve for the set. But that’s when Sabalenka seemed to find her range again, and her blistering backhands brought her back from the brink to level at 5-5. 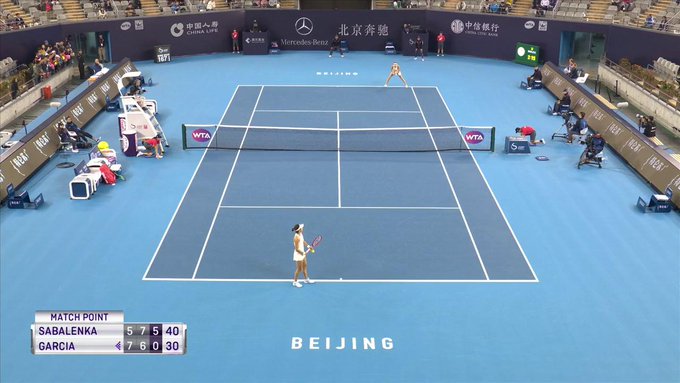 The defending champion shook off those last three games, getting right back on track as Sabalenka’s unforced error count grew, and she served it out to avoid the tiebreak.

Garcia was probably feeling a bit of deja vu in the second set – she broke early at 2-0 and eventually built up a 5-2 lead as Sabalenka struggled to stay in the contest. But just as Garcia was serving for the match, Sabalenka once again pulled the rug out from under the Frenchwoman.

She came all the way back, leveling at 5-5 and wrestling with the momentum – this time, she was able to send them into a tiebreak. Despite Garcia starting with a 2-0 lead, the Belarusian was able to complete another comeback, reeling off the last six points in a row to take the set and bring up a deciding set.

Losing the second set in such a manner was crushing for Garcia, who seemed to flag as Sabalenka’s level soared – she broke Garcia three times to win the final set in a shutout, booking her spot into the Beijing quarterfinals after two hours and 21 minutes.

Sabalenka’s victory also means she’s still alive in the Porsche Race to Singapore – the Belarusian needs to reach at least the Beijing semifinals to stay in contention for the last three WTA Finals spots, and could qualify outright should she lift the title.

“When I was down 5-2, there was nothing to lose and I start to play tennis. I didn’t think about, like, how good I am or just like didn’t want to put the ball totally in the line… Doesn’t matter how, just put the ball in and try to win every point.

“I was really lucky that I won second set. After that I don’t know what happened with her, but she didn’t run that well like the first and second set. She didn’t put the ball in like before… But before third set she played really unbelievable tennis, I couldn’t do anything. I didn’t have my serve. I don’t know what happened. She played really well. At the moment I’m just so happy that I won second set. Third set, I was lucky she didn’t play.”

Up next in the quarterfinals, Sabalenka will take on another on-fire player as she faces China’s No.1, Wang Qiang, and her impressive home record. Wang has won 16 of her last 28 matches on home soil – one of those being a retirement due to injury – and earlier in the day she took out No.7 seed Karolina Pliskova in straight sets.

Dominate 2019 With These Must-Have Travel Tools

Expert: Ange’s Yokohama F Marinos will be favourites for 2019 J-League

American teenager Catherine McNally knocked out the last remaining seed at the Citi Open on Friday.
To Top